Rights not being met? Get support.

How gardening at school can tackle child obesity 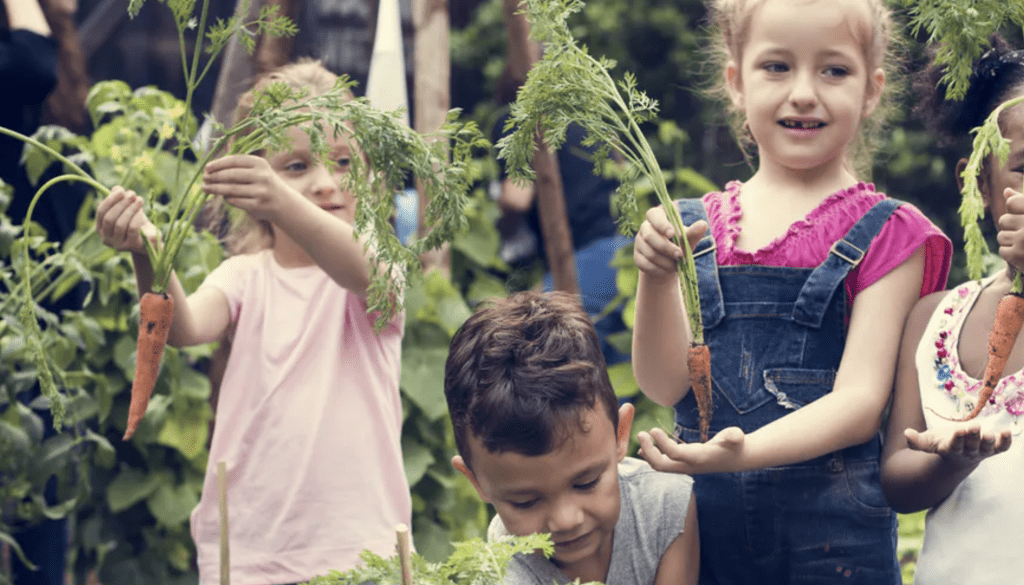 Childhood obesity is a major public health concern in the UK. Surveys conducted in 2017 and 2018 showed that 28 per cent of children aged from two to 15 in England were overweight or obese.

Overweight and obese children have a greater chance of staying obese as adults. They are at risk of developing diseases in adulthood such as type 2 diabetes, cancer and osteoarthritis.

This rise in obesity has been fuelled by poor diet and a decline in physical activity. Only 41 per cent 11 year olds in Europe and Canada have vegetables in their daily meals, while only 24% participate in at least an hour of moderate to vigorous physical activity (such as brisk walking or running) daily.

Tackling this problem early in childhood is important to develop lifelong healthy behaviour. One potential solution is integrating vegetable gardening into the school curriculum. This strategy both addresses low activity levels and models healthy eating.

In 2018, Dr Ruth Bell and I worked to design and study a school gardening project in a London primary school. We carried out this project together with the Conservation Volunteers, a community volunteering charity working towards creating healthier communities, and Meat Free Monday, a not-for-profit campaign which aims to raise awareness of the impact of animal agriculture and industrial fishing on the environment and encourage eating plant-based meals.

Children at the primary school participated in regular gardening sessions, for two hours each week over a whole academic year. They also took part in educational sessions on the environmental and health benefits of plant-based meals, and were encouraged to taste and try new vegetables.

The gardening activities were designed around children’s own suggestions: they drew plans for developing the school grounds and created nature maps showing their ideas for the location of the garden and other features to encourage wildlife.

In the winter, the children prepared raised beds for growing spring crops – weeding, covering and refilling them with leaf mulch. They sowed seeds and took care of their grounds and the garden.

In order to assess the impact on the children, we compared the gardeners against a control group. For half a year, 30 children in one class continued their regular indoor school sessions – the control

group – while 30 from another class took part in the gardening activities. In the second half of the year, the control group were also given the opportunity to get involved in the gardening.

We asked all 60 children to wear GENEActiv accelerometers for seven consecutive days to record their different activity levels. They also responded to a questionnaire that asked them about what they think of fruit and vegetables and how much of them they eat.

We found that children who participated in the regular gardening sessions spent less time sitting than their peers who had their classes indoors. The children attending the gardening sessions were also more active, taking part in more moderate to vigorous intensity exercise than their peers in the other class. In discussion with us, children mentioned growing muscles as they engaged in different kinds of gardening activities.

Although it was winter, that did not matter much to the children. They were eager to spend more time outdoors as they enjoyed gardening activities in the school grounds.

In winter, the children spent a lot of time on preparing the garden for spring crop growing and did not have the chance to taste the produce from the garden. Some of them thought they would have eaten more veggies if they could work in their gardens all year round, and could plant, harvest and taste their own garden grown veggies.

Teachers found that children who had not been performing well in the class found themselves doing better in the outdoor sessions, which then transferred to their regular school sessions. One student who was particularly struggling in the classroom showed leadership abilities and subsequently signed up to join the Scouts. Children with learning difficulties were also more engaged in the gardening sessions.

The children told us that they thought nature can bring people together and make people kinder and better. One of them mentioned having an argument with a friend in the classroom but making up during the gardening sessions. The children also expressed their frustrations with their school lunch options, and that they would have preferred more vegetarian or vegan options and variety in vegetarian recipes. Integrating gardening sessions with the curriculum can inspire teachers to take classes outdoors. Wide-scale implementation could improve children’s health in the longer term and tackle the obesity pandemic.

This article is republished from The Conversation under a Creative Commons license. Read the original article